A “deadly game” on the streets of Dhaka

As antiretroviral treatments continue to make progress, the AIDS scare is finally calming down in the West. On the other side of the world however, the virus continues to kill. In Bangladesh, it’s drug users who are falling prey to this devastating disease. Our Observer in Dhaka sent us these arresting images.
Ever since the first case of HIV was reported back in 1989, AIDS has been a quietly growing but deadly problem in Bangladesh – and in particular in Dhaka. Although the country as a whole is deemed by the UN to be “low-risk”, the disease is spreading at a worrying rate among one section of society: intravenous drug addicts who reuse dirty needles in the urban slums of the capital. According to UNAIDS statistics, the number of HIV-positive drug users more than doubled between 2001 and 2005. Health experts warn that the risk of an epidemic is increased by that fact that many of the addicts also admit paying for sex – and only 10 percent say they always use a condom. Our Observer in Bangladesh has been documenting the plight of these people for the past three years. Here is what he found: a “deadly game” on the streets of Dhaka.

When you talk to them you realise they are just waiting for death”
Monirul Alam is a noted photojournalist from Bangladesh. He’s worked with the local daily Prothom Alo, and also foreign publications including Time and Newsweek. He has a blog https://monirul.wordpress.com/

“Most of these people are young, homeless and unemployed. Some of them don’t know anything about the disease they’ve got. Their frustration with life has led them to become drug addicts, and when you talk to them you realise they are just waiting for death because they have nothing else. Drug abuse is a growing national concern in Bangladesh. We have millions of drug-addicted people and most of them are between the ages of 18 and 30. And in Dhaka HIV is widespread too. The government and NGOs are doing very little – at least, not enough to help those who are infected.”

January 2009 Dhaka Bangladesh. A migrant’s people sleep on the street at Karwan Bazar at midnight. The migrants were lured by visions of money, food and a better life, but many of them failed to realize their dreams, and the rural poor became the urban poor. 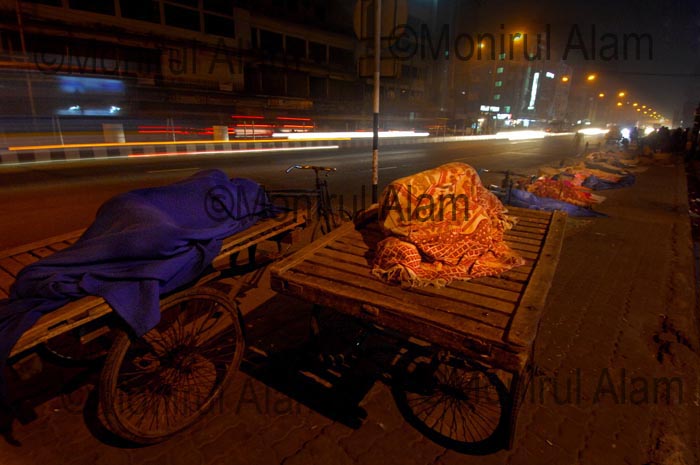 Wherever I go I see the life that around me.  I always carry on my camera. I feel it and I love picture and words . . .

An artist puts the final touches to an idol of the Goddess Durga ahead of the largest Durga Puja festival of the Bengali Hindus community in Dhaka, Bangladesh, 26 September 2022. The Durga puja will run from 01 October to 05 October 2022. According to Hindu faith, goddess Durga comes down to the earth from the heaven to establish peace, harmony by annihilating evil forces. EPA-EFE/MONIRUL ALAM